IF YOU CAN WORK A COUPLE OF ELECTRICAL PLUGS, THEN YOU CAN GIVE YOUR LATE-MODEL DIESEL AN EASY GAIN IN BOTH POWER AND ECONOMY.

Common rail direct injection (CRD) diesels are here to stay. There’s absolutely no doubt that the higher pressures these systems operate at give a great many advantages to the 4WDer. They produce more torque per cubic inch, they’re cleaner burning, and they burn a much higher percentage of their fuel charge than an old-tech mechanically injected engine.One area where they often fall short, however, is with their fuel maps. CRD systems are overseen by a host of sensors, all running back to the ECU. The fuel maps are essentially what determine the engine’s power output and fuel usage. There are a bunch of reasons that manufacturers run their standard timing, pressure and fuel delivery at a conservative level. Factors such as fuel quality and different emissions regulations over different countries, as well as others, all play a role in determining the ‘one size fits all’ approach to factory injection mapping.While we can understand why 4WD makers run these generally conservative tunes, it doesn’t mean that we have to accept them! Luckily, when it comes to diesel performance, we have some pretty smart cookies here in Australia and we’re fortunate to have one of the best supported aftermarkets for CRD injection in the world. Take the Aussie-developed Diesel Performance Chip for example. This unit simply plugs into the injector rail pressure sensor and can be mounted almost anywhere in the engine bay. It’s commonly less than half an hour to complete the job and you’re quite literally plugging in power. The DPCHIP operates by altering the pressure of the fuel that’s stored in the rail. By running progressively higher pressures as the throttle is opened, there’s more fuel introduced into the cylinder when the injectors open than there otherwise would be. The DPCHIP functions on the premise that more pressure equals more fuel, which equals more power. It may be simple physics, but it gets results!1.When a new 4WD rolls off the factory floor, it is generally equipped with fairly conservative fuel timing and pressure mapping.There are a few reasons why manufacturers do this, but factors such as available fuel quality depending on the country the vehicle is being sold in and emissions regulations lead to this shoot-for-the-middle way of thinking that is common amongst new truck engineers. Luckily, this approach leaves a fair amount of room for modified mapping to allow not only significant increases in power and torque, but fuel economy too.

2.This is where power modules, or chips as they’re more commonly referred to, come ,into play. Through various means they manipulate the standard fuel delivery and timing signals sent by the ECU to facilitate much better responsiveness from your commonrail injection equipped truck. It’s important to ,note that while all brands of chip will gain you some power, some of the ways in which it can be done are not necessarily the best for your engine’s long-term health.

3. DPCHIP’s power module is one of the better units on the market. It functions off the pressure sensor at the fuel rail. It alters the rail pressure at specific times so that when the injectors are cracked, more fuel is injected for the duration they’re open. Think of your garden tap as the injector and your bucket as the combustion chamber. If the hose is turned on by a small amount for exactly one second, then a small amount of water (fuel) is delivered into the bucket. If the tap is opened right up, so that there is much higher pressure being applied, you’ll get a lot more water in your bucket in that one second. Makes sense doesn’t it? 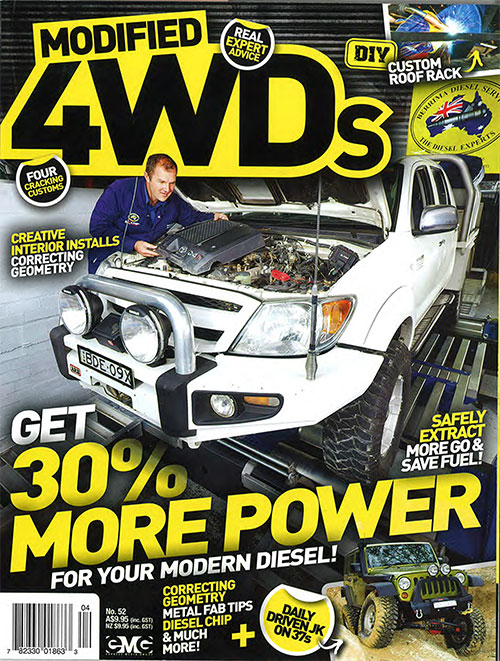 4. Of course, if your injectors were just getting as much fuel as possible all the time, then you’d be over-fuelling when at driving with little throttle input, such as in traffic or when at idle. Unfortunately, some modules do exactly this, and while power may well be increased, you’re not doing your engine any favours. The DPCHIP digitally monitors your rail pressures and throttle position closely through the use of its internal microprocessor. Using digital, rather than analogue, technology allows for a much finer degree of tuning to be achieved and maintained across the whole rev range. Analogue units are primitive by comparison and often need retuning on a regular basis. The DPCHIP is a set-and-forget item, although can still be tuned to suit other modifications as you do them.

5. The great thing about doing things this way is that reliability is not affected, the injection timing is largely left alone, and the boost pressures (which are pretty high from the factory these days) are not changed. This means that the engine will run for exactly as long as it would have without the chip. Getting a big increase in power and economy without affecting reliability – where do we sign?

6. On top of this, not only does the DPCHIP make your vehicle a whole lot more driveable, but it is literally a snap to install and well within the capabilities of anyone with a small amount of mechanical knowledge. The process is as simple as unplugging the ressure sensor on the fuel rail, clipping in the module to either fitting and securing it with a couple of cable ties somewhere up and out of the way. We saw Andrew from Berrima Diesel install one in less than 10 minutes on a late-model Pajero when we were last there. After a quick chat, the owner had a cup of coffee in the waiting room and was on his way within a quarter of an hour with a whole lot more responsiveness under his right boot.

7. The DPCHIP was developed right here in Australia for Australian conditions. The first examples were produced over 15 years ago by Reinhard and Andrew at Berrima Diesel, and the application list has since grown to include a massive range of 1200 vehicles, and still continues to expand today. The circuitry is manufactured in Germany to the highest standards, before being shipped to Australia and assembled by hand. That means that each chip is put together and programmed by one person rather than an assembly line which means that each module is tailored to your specific vehicle and is not a ‘one size fits all’ affair.

8. Dyno-backed figures of up to 35% more power and torque have been seen with the DPCHIP, which is a significant gain in anyone’s language. Given the fact that it is installed ‘downstream’ of the ECU, all fault codes and error detection is unaffected and remain intact. Another very handy feature of the module is that it can easily be recalibrated to suit any further power mods you may do to your truck. Let’s say you bolt on a turbo and intercooler upgrade, you can easily maximise your performance with an easy laptop USB plug-in or even manually click the adjuster to take full advantage of your enhancements.

9. It’s easy to bang on about how good these chips are, but let’s take a second to appreciate just how much they deliver. Leaving aside the economy gains, if you wanted a 35% power increase on your old mechanical injection turbo-diesel engine, you’d be looking at pump and injector mods, intake work, and a turbo upgrade as a minimum. When you factor in parts and labour, you’d be staring down the barrel of $4000 if done properly. Now consider the chip. You get all that extra power with no adverse reliability issues, decreased fuel consumption and it’s quite literally a plug-and-play ten minute job to do and just as easily reversible for around a third of the price! For our money, it should be the first mods looked at when it comes time to give your engine a kick in the pants.

10 As mentioned, the DPCHIP range includes a massive 1200 vehicles, so there’s a good chance that they’ve got you covered. They cater to both naturally aspirated and turbocharged engines from all over the world. Give the guys a call today for your options for some plug-in power!