The Next Step (June issue of Overlander 4WD magazine)

Make no bones about it, semi-retired builder Bob Fyfe has got nothing but Toyota blood running through his veins! You see, this fantastic looking 200 Series is what Bob calls a “natural progression” in a long line of Toyota 4WD’s. After plenty of Hilux’s and a trusty 80 Series, Bob took the next step (well, he kind of stepped over the loo Series!) and laid down the order for a brand new top-of-the-range 200 Series Sahara back in 2008, and he has been slowly building it up into the touring weapon you see before you.

When we asked Bob about the Sahara he told us, “The 80 was a good truck, but I knew that when I finally upgraded, I wanted to have a little bit of luxury built into it”! Well the Sahara certainly doesn’t fall short in that department, with a list of standard inclusions as long as your arm, and even a refrigerated centre console! Perfect! But like any new 4WD, there are always certain areas that could use a few improvements, particularly if you plan to get out there amongst some f the best off-road terrain the country has to offer! One of the first things on Bob’s extensive list was protection for the 200’s shiny black panels, and a visit to the guys at ARB Artarmon soon had an ARB Deluxe winch bar fitted up front, and initially, an ARB rear protection bar. “I fitted the protection bar first, after a while I realized that I wanted to have a swing-away wheel carrier fitted, and I really did like the look of the Kaymar rear bar but because the panels had already been trimmed to suit the ARB bar, I decided rather than buying a new rear bumper and starting again I would fit the ARB swing-away bar and I am very happy with it”. But Bob hasn’t finished with the barwork yet, he has a set of ARB sill protectors on order which will offer some much-needed protection to the long 200 Series sill panels. The finishing touch to the bar work is a Warn 12,000Ib winch that ensures Bob always has an ace up his sleeve should he find himself in a spot of bother off-road.

Experienced overland 4WDers know that when you add a fair amount of weight to a 4WD, it really pays to ensure that you upgrade the suspension accordingly, and Bob has done just that. Once again, the boys at ARB Artarmon were called upon to weave their magic, and the result is a 200 Series that still rides like a new one, but it deals with the loads in a much safer mannet “I’m very happy with the suspension” Bob told us. He went on to say, “The guys recommended a kit from Old Man Emu, and the struts and shocks are perfectly matched to the OME coils”. The rear shocks also feature a set of clever stone guards that protect the shocks from damage from flying rocks and road debris that you find in the outback. The OME kit not only delivered Bob a great ride and handling, but also a 50mm lift in overall ride height, something Bob welcomed! “The lift has worked out fantastically, but I still wouldn’t mind even a touch more lift for those really steep tracks that you find in the High Country, they have a nasty habit of catching out the wagons on the underbelly”! 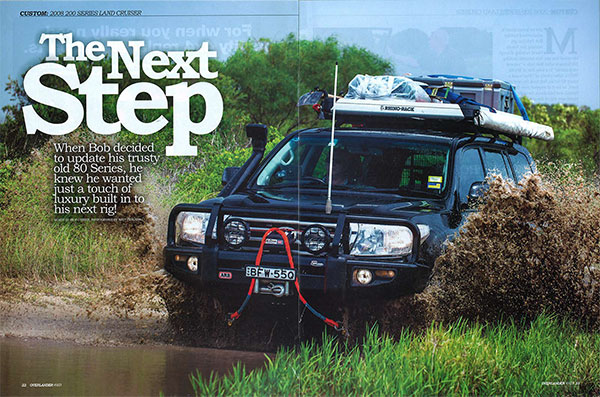 Taking full advantage of the 50mm lift, Bob has had a set of Cooper Discoverer ATR tyres fitted that measure up at 285/70r17, or around 33m in the old money. The standard Toyota alloy rims were utilized as they are known for being an incredibly robust unit. Some of Bob’s favourite off-road destinations also happen to offer some of the best terrain in the country so it comes as no surprise to learn that Bob has had a matching pair of ARB Air Lockers fitted to the big wagon, and Bob reckons that they are just about the best modification he has made to the 200. “I love geffing out to the High Country the Flinders and even the Simpson Desert, and the lockers just nake it so much easier on the truck. I consider myself to be a fairly careful and conservative off-road driver, but it is nice to know that I can deal with the more extreme stuff if it does come my way. I think diff locks are simply a must-have”.

While Bob has done plenty of work on the outside of the 200 Series, he hasn’t neglected the inside! Out the back a set of Black Widow roller drawers have been fitted, and they provide a great home for the huge recovery kit that Bob takes away on every off-road adventure. Bob told us, “I like to carry two of everything in the recovery kit because you never know when your life might depend on it”. The drawer system is also home to a MSA drop slide unit that makes accessing the fridge as easy as can be.

Moving up front commurdcations are taken care of by a CMB TX3340 UHF, and for the remote area trips, Bob hires a Sat Phone, just in case. To keep Bob and wife Debbie on the right track, a VIvIS 700HD navigation unit is fitted and it has been loaded up with Ozi Explorer and Hema maps, and this fies in nicely with the factory Sahara in-dash satellite navigation unit that takes care of the city streets.

Even though Bob says that the mighty twin turbo V8 diesel powerplant under the bonnet is nothing short of sensational, he figured a few more ponies wouldn’t go astray. To achieve this Bob had a DPCHIP fitted and although he loves the extra performance it provides, he has been more amazed at the significant increase in fuel economy! Bob says, “The extra power is great, but you do get used to it pretty quickly. What surprised me was the great improvement in fuel economy! I reckon I get at least 10-15% better economy than I did before the DP Chip was fitted. I think I might have to get an exhaust system as well now, because I’ve been told that will bring even more savings!” Sounds like a great excuse to us, Bob! Other under-bonnet modifications include a third battery (Toyota has two cranking batteries as standard) to keep the amps supplied to the fridge, and ensuring that the two start batteries are never starved for juice is a Piranha DBE 180S battery management system.

To make the most of the new-found fuel economy, Bob decided to have an auxiliary 70L tank fitted, taking the fuel carrying capacity to a whopping 163L in total. “I can usually get around 1,200km or so in between fuel stops now, as long as the roads are good enough to allow a steady cruising speed”. And when you consider that Bob has a few destinations such as the Cape, the Canning and the Kimberleys still left to do on his bucket list, that is a good thing!