IN THIS day and age new things are coming along thick and fast, and some are great and are some not worth thinking about. When I ﬁrst became aware of the DPChip I must admit I was a bit sceptical as so many of these devices that claim to increase power and provide better fuel economy have come – and gone!

So I went to the DPChip head ofﬁce at Berrima in New South Wales to have one installed, with a mind to put it to the test in the ﬁeld and under heavy towing conditions. Andrew Leimroth from DPChip spent some time explaining the beneﬁts of the chip to me, and then the installation on my 100 Series Toyota LandCruiser commenced.

The installation process is pretty simple, and people with DIY experience could ﬁt the device themselves. For those without DIY experience, DPChip has 200 authorised ﬁtting stations Australia-wide. 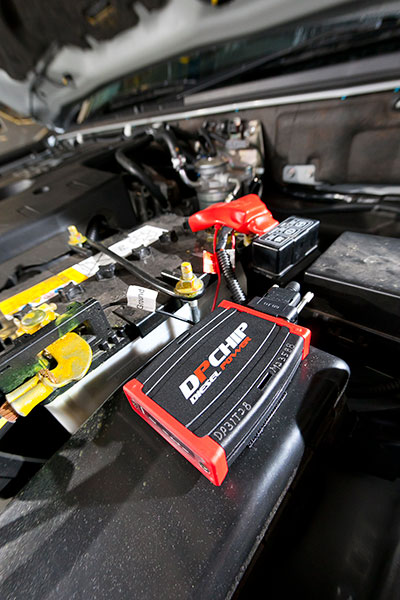 For my 100 Series installation, the process started with removing the fuel injector pump cover, and then the wiring loom was plugged in as per the instructions. The actual unit is placed on top of the fuse box, which is the best place for it in the 100 Series LandCruiser. It’s held by double-sided tape or silastic.

The install process on my ’Cruiser at the factory took about 15 minutes, and Andrew advised that with some vehicles it might take a little longer. Diagnostic testing is performed after that, which I also had done at the DPChip head ofﬁce in Berrima.

Once the chip is ﬁtted, Andrew usually takes the vehicle for a drive, but this time he suggested that I drive and he be the passenger. I was amazed to notice an immediate difference. Usually when I take off, I depress the accelerator about a halfway, but this time I seemed to be touching the pedal a fraction of the norm. This also applied as we were driving down the highway, and the vehicle’s overall performance seemed to be improved.

When we got back to the factory, Andrew advised that I would notice the real difference once I was towing and the vehicle was under load.

The ﬁrst test came the following week when I was towing a two-tonne-plus caravan through mountainous country in Victoria, cruising along bitumen and dirt roads. Again, I noticed that I was using a lot less accelerator pressure and, when the rig was rolling, the power was being produced at noticeably lower revs.

Travelling the steep and winding terrain I had a grin from ear to ear as the LandCruiser was changing gears less often and seemed to be relishing the towing job. I could really notice a huge difference in the vehicle’s performance, and overall it felt like effortless towing.

So far, the DPChip experience has been good, though it’s early days yet. The chip is claimed to increase power and torque by up to 35 per cent and fuel economy by up to 10 per cent.

Pre-chip, the LandCruiser was delivering a fuel economy of 10 litres per 100km, on the highway cycle and not towing. So far, I’ve achieved a ﬁve per cent decrease in fuel consumption, but have yet to clock up enough towing-kilometres for a realistic economy comparison.

To date, the product has lived up to expectations – and blown away my original sceptical thoughts. It’ll be further tested, particularly under towing conditions.