Hino Ranger gets a Power-up

We left Sydney about 7am for the 1hr trip down the M5 to the Southern Highlands. The brand new Hino Ranger Pro 10 (GH1J) we were in moved along the highway smoothly until we hit ‘Cutaway’ hill just south of Mittagong. We noted that in sixth gear we had dropped from 90kmph back to 62kmph by the time we were about three quarters of the way up. We were heading for Berrima Diesel Service to have a DPChip fitted to the Ranger and anticipated a good improvement from what we had been told about this device. Before long we were pulling into the driveway and being greeted by Andrew who was going to fit the device for us today. 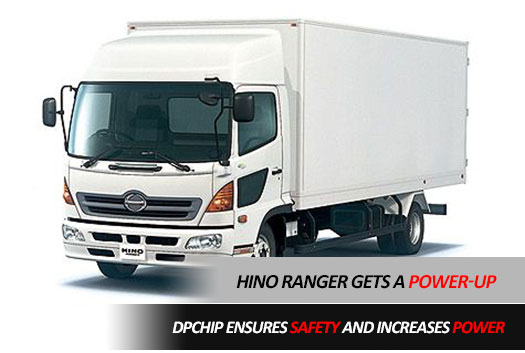 The DPChip is a simple plug in device for EFI diesel vehicles which can improve power and torque by altering the engine management parameters to maximise efficiency. All engines come out of the factory set quite conservatively for a variety of reasons. A good example of this is evident in the Ranger Pro series with a variety of outputs from the same engine. The DPChip plugs in after the vehicle’s ECU (on the Ranger it required a small harness and a few wires connecting in so the DPChip could then plug in) and intercepts the signals being sent to the engine. It then modifies and enhances these signals, within safe tolerances, and sends them on their way to the engine, with power and torque being greatly improved. An added benefit is often a fuel saving with improved economy as gear changes become smoother and less often required.

Andrew had the DPChip fitted up in about 35mins and we were ready for a test drive to fine tune it to the Ranger. A simple adjuster on the side of the module was used for adjustment. (Note: There is also facility for laptop adjustment in some models.) Instantly we could notice the benefits as the truck pulled up the hill out of Berrima after rolling on at 1200 revs in 6th (Top)gear. There was definitely more power available and it felt a much smoother ride. The real test would be on Cutaway hill which we had used as a benchmark on the way in. After a few tweaks on the DPChip, Andrew was happy with the settings. We hit the hill at 90kmph in sixth gear again and the difference was substantial. By the same point at which we had had to change down before (about ¾ the way up doing 62kmph) we were now still doing a comfortable 78kmph in top gear!

The Ranger definitely had more get up and go and was a real pleasure to drive on the run back to Sydney. Andrew was happy to tell us that we will probably get better consumption too and that any concerns we had of tweaking the engine were put to rest as he explained that the original engine management safety systems are left intact and operational with the DPChip ensuring safety and longevity of the engine.

I’m sure you’ll be impressed with the extra power this tiny plug-in box can give your vehicle. If you find hills a struggle or just feel your truck could do with a bit of extra get up and go then I’m sure you’ll find the DPChip a real benefit. They are available through various workshops and retail outlets throughout Australia for all EFI Diesel engines (cars, 4wd’s, trucks, light commercials, agricultural machinery, construction equipment and boats).