The benefits of good mechanical advice

Recently a customer came to see me in distress. Visiting me was a last resort before having to sell his vehicle. The story goes something like this…

He had spent around $6000 in repairs on his vehicle so far, and none of the problems had been fixed. There was an error light appearing on the dash and the engine had low power. He told me that the turbo was running a boost pressure of up to 26PSI and even higher at times. After some checks, it was decided by his mechanic that the turbo needed replacing. A new turbo was installed for about $4000, and he drove off a few days later.

After a few weeks, the error light came back on again. He took it back to the mechanics and this time they said the intercooler had a leak of oily residue around it. The mechanics told him the leak in the intercooler was causing the turbo to compensate by running high boost. $2000 later, he drove away again. However, over the following months the error light continued to come on and off, until he had had enough. 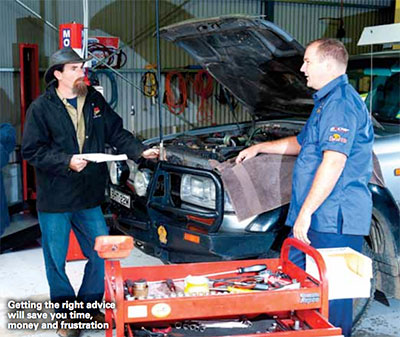 He eventually contacted me and brought his vehicle in. We spent a lot of time talking in order to get as much information as possible about his vehicle. It’s a bit like going to your doctor – if you don’t tell them everything, how can they know how to help you? We continued to go over all the details with him in an effort to piece, what I call ‘forensically’, all the information together.

Following the discussion, we performed our standard diagnostic tests and found that the boost code was there. After further checks, we found the turbo to be working fine, but running high boost. The customer’s complaint of low power but high turbo boost didn’t sound quite right. So we went searching and, after some electronic tests, found a faulty air mass sensor in the air cleaner. We simply popped a new sensor in for a few hundred dollars and the vehicle was fixed, now with a huge return to normal power and the boost safely back at a standard 14PSI for this vehicle.

This just shows how important good mechanical advice and diagnosis is. The old technique of ‘repair, repair, repair, fix’ is far outweighed nowadays due to the cost of misdiagnosis.